This is the official page of International Radio Listeners' Friendship & Fraternity Club (IRLFFC) written and maintained by MITUL KANSAL.

The club will give the chance to become friends with listeners and Dxers in other countries. The club will serve as a platform to take part in discussions, dialogue, and exchange opinions with people in various parts of the world. For a while it was like a dream but now it is a reality. By joining together we can do a lot for our planet. For example, help to ensure peace on Earth and save the environment. The main task of our club is to get acquainted with listeners in other countries. I think in a country where you have friends there is no room for enemy. And lastly very important, the members will established and promote friendship, fraternity and mutual understanding among them and it will be a first step to maintain peace on our Earth i.e. our common home.

Posted by MITUL KANSAL at 11:14 PM No comments: 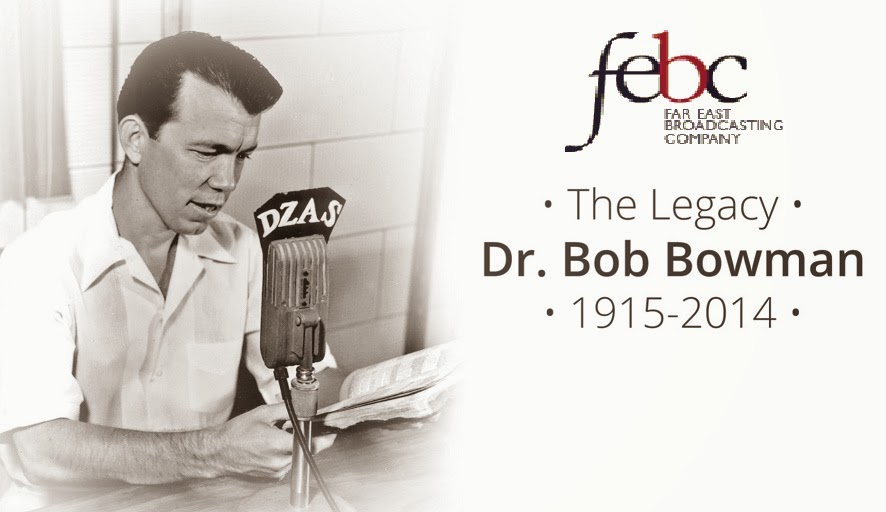 In 1945, two young men named Bob Bowman (who incidentally passed away earlier this year) and John Broger established Far East Broadcasting Company (FEBC). They had no financial backing, no supportive board, and no church denomination. With China in mind they aired their very first broadcast from Shanghai. But by 1948 all mission work in China was shut down. As an alternative site, operations resumed in the Philippines on medium-wave. International broadcasts to China started the following year in 1949 and have since expanded to cover most of South East Asia, as well as Russia, Ukraine, and Kazakhstan. FEBC’s sister organisation, FEBA, broadcasts programmes in Africa, the Middle East and India. Over 100 ethnic languages are broadcast over FEBC, covering a total 700 broadcast hours per day.  Iu Mien -- a Laotian dialect -- is one of the languages which I happened to catch just recently.  Whether one subscribes to FEBC / FEBA's religious convictions, their marketing effort to reach out to even these "hard-to-reach minority groups" is truly amazing.  73s!

FEBC Radio, transmitting from Bocaue, Philippines, was logged on 10 April 2014. Christian evangelical religious programming with choral music in Iu Mien was monitored from 23.10 to 23.30 UTC (broadcast time 23,00 to 23.30 UTC). Reception on 9.365 kHz throughout the broadcast was (SINPO) 54445 -- excellent signal strength with minor transmitter noise, slight atmospheric noise and fading.

Reception report was emailed and submitted on-line the following day.

Email ThisBlogThis!Share to TwitterShare to FacebookShare to Pinterest
Labels: FEBC Radio (via Bocaue)

One indispensable tool in radio monitoring is a reference book, or as is the case today, a smartphone app for devices using the Android operating system. One such app is Shortwave Radio Schedules developed by Stephen Cooper. 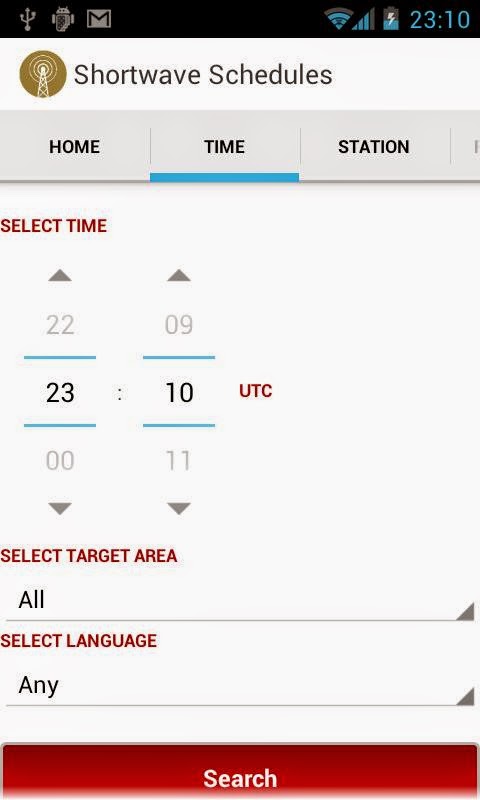 The app conveniently lists the complete schedules compiled by Eibi and AOKI, including almost every known shortwave station currently on air, their times, frequencies and transmitter sites. Best of all, this data can be recalled without an Internet connection should access be unavailable.

dentifying a station is simple and may be done a number ways. One can search a station by name, frequency or time. Additionally, the app uses Google Maps to show the targeted transmission beam of each station. One may even log and record one's observations with this app.

Android users can acquire the app HERE. For non-Android users the schedule can be found on the Internet HERE.

I have used the app on a Samsung Galaxy 3 Tab for nearly four months now, and I find it remarkably stable and useful. I heartily recommend it!!! Thank you, Stephen. 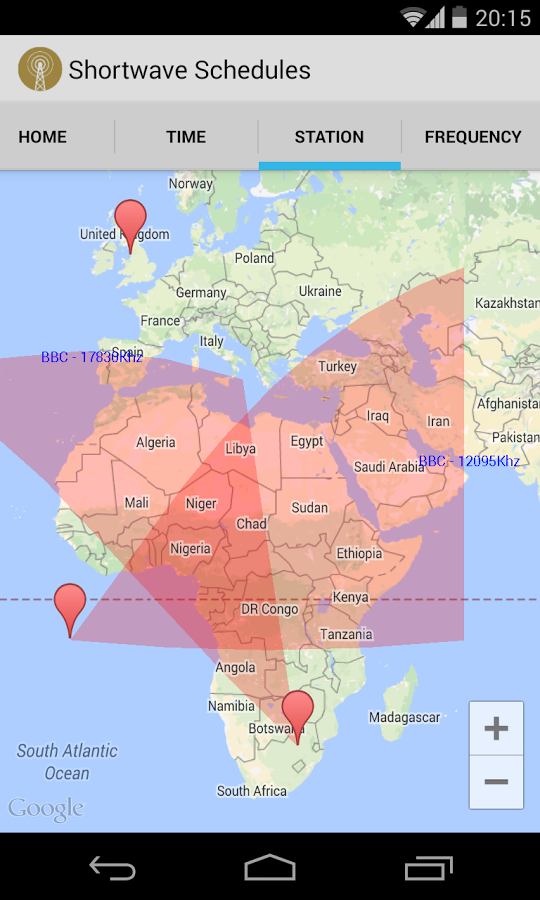 AM Radios with CONELRAD Symbol

If you grew up in the United States during the Cold War era, you are probably old enough to remember the US Civil Defense (CD) frequencies marked on AM (medium wave) radios. A "CD symbol" with simple white or red triangle highlighted the frequencies 640 kHz and 1240 kHz. These designated frequencies aided listeners in tuning to CONELRAD stations. 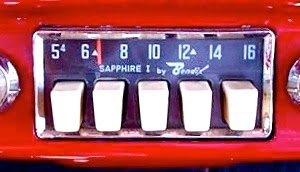 CONELRAD (Control of Electromagnetic Radiation) was a method of emergency broadcasting to Americans in the event of enemy attack during the Cold War. It was intended to serve two purposes: (1) to prevent Soviet bombers from homing in on American cities by using radio or TV stations as beacons, and (2) to provide essential Civil Defense information.

I recall from the 1950s and 1960s -- especially the early 1960s -- radio stations (TV stations too) would occasionally interrupt regular programming and test the Emergency Broadcasting System (EBS). It would begin with the message, "This is a test. For the next sixty seconds, this station will conduct a test of the Emergency Broadcast System. This is only a test." It was followed by a shrill sound that combined sine waves of 853 and 960 Hz, an interval signal so unpleasant it attracted the collective attention of the public. Decoders at relay stations would sound an alarm, alerting the station operator to the incoming message. After the test an announcer would state, "If this had been an actual emergency, you would have been instructed to tune to one of the broadcast stations in your area." 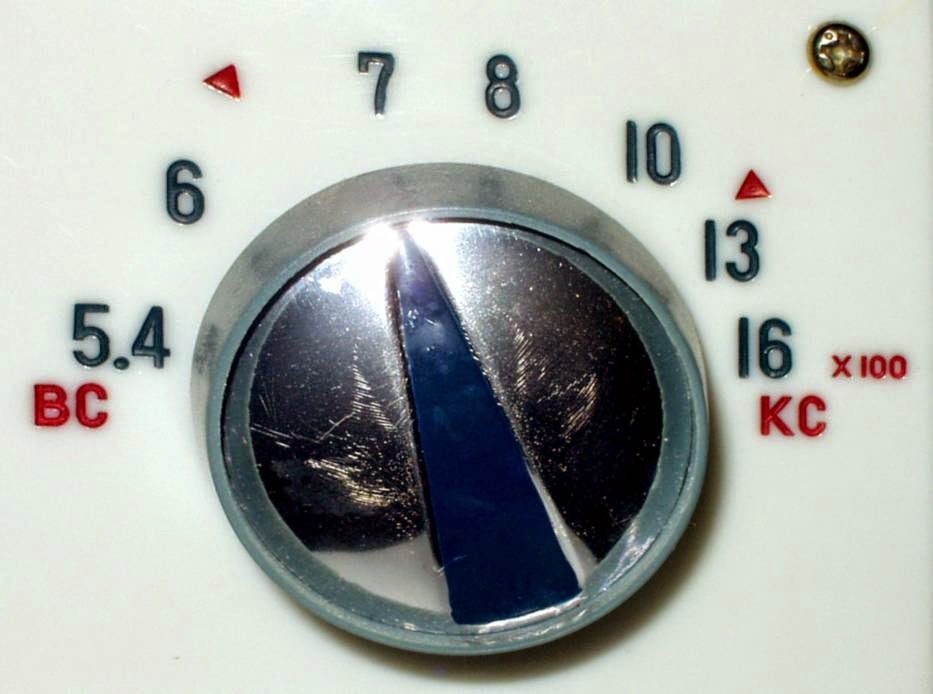 Portable AM radio with symbols


The purpose of the test was to allow the US Federal Communications Commission and broadcasters to verify that EBS tone transmitters and decoders were functioning properly. In addition to the weekly test, test activations of the entire system were conducted periodically for many years. These tests showed that about 80% of broadcast outlets nationwide would carry emergency programming within a period of five minutes when the system was activated. Over the years the message and procedure changed, but essentially the content remained.

Today, you will find no radios with this symbol. It is the relic to a dreadful past, hopefully gone forever.

Email ThisBlogThis!Share to TwitterShare to FacebookShare to Pinterest
Labels: AM, AM Radios with CONELRAD Symbol, CONELRAD, Radio, Symbol

Posted by MITUL KANSAL at 3:13 PM No comments:

On 13th of February 2014, a SWL and Ham meeting was organised in Roots- Cafe in the park, Gurgaon. Here are the some of the photos.

Posted by MITUL KANSAL at 2:32 PM No comments:

Posted by MITUL KANSAL at 2:12 PM No comments:

On 20th of March 2014, I got the opportunity to meet Anil Janvijay who was in New Delhi to give me the prize which I won in Radio Voice of Russia Sochi Olympic Contest.

Posted by MITUL KANSAL at 2:09 PM No comments:

Posted by MITUL KANSAL at 2:03 PM No comments:

The views expressed in the articles published on “International Radio Listeners’ Friendship & Fraternity Club” are solely those of the authors and contributors, and do not necessarily reflect the views of the Blog Owner. The Readers are requested to contact author or the contributor of the particular article if they have any objection or do not agree with the views expressed in the article. Please do not ask the Blog Owner to delete or change any Post published on this blog. The Post will be removed only after strong recommendation of the original author / contributor after proper verification.

MITUL KANSAL
Shahabad Markanda, Haryana, India
Hi...I am a 27 years old Shortwave Listener (SWL) & a HAM Radio Operator from Haryana, India. My Call-sign is VU3MCN. I write this blog in my free time. I like to collect QSL Cards from Radio Staions. I also like Writing, Photography, Stamp, Banknotes & Coin Collecting. 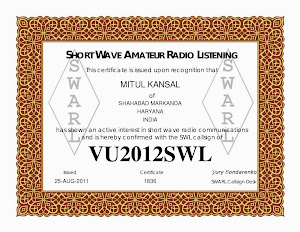